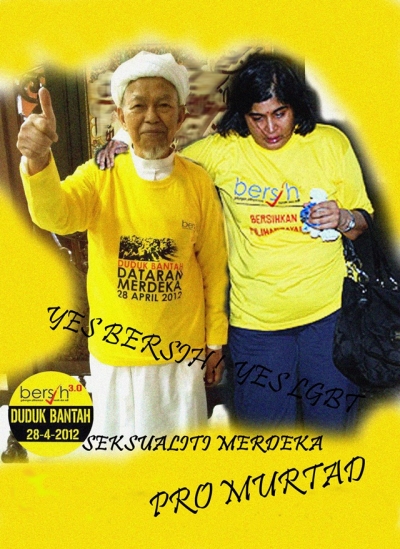 We would never really know whether S.Ambiga is confused, stupid or just a hypocrite. She somehow took herself as the true fighter for human rights and how she is denying the rights of other people to do business and assemble in front of her house.

Ambiga went berserk when 20 business owners from the Pertubuhan Ikatan Usahawan Kecil dan Sederhana Malaysia (Ikhlas), who suffered loss due to Bersih 3.0 who wanted to get compensation from her began to operate their business in front of her house.

Her excuse was that they had violated her privacy rights. She even described them as crooks.

It is true that Ambiga has her rights to privacy, but she has to remember that these small business owners also have their rights to look for business wherever they like. Besides, didn't she showed examples that everyone could assemble anywhere they want including business places, even though it could threaten others' rights in making money.

And she was also the person who said that everyone has the rights to trespass and break the law all they like.

It is a bit weird on the fact that these business people were described as crooks when they didn't even cause any damage to Ambiga's property unlike her followers when they destroyed a police cars and injure police officers during BERSIH 3.0.

Ambiga cannot be mad if those businessmen make any mess around her house because that is their right, just like how BERSIH 3.0 had the rights to cover Kuala Lumpur in garbage back in April 28.

In this case, Ambiga should remember that at least she and her neighbours did not suffer any loss. Nothing much really happened.

These business people suffered even more than she did during BERSIH 3.0 and their loss was not small. That did not include their loss back during BERSIH 2.0 that is still yet to be compensated by Ambiga.
Didn't she realize that these small business owners are actually the people that she wants to defend through her BERSIH agenda?

Thus, why call them crooks just because they wanted to fight for their rights that was taken away by Ambiga?

So, it is not wring if we say that Ambiga and BERSIH has never really symbolize the voice of people but they symbolize those who support the opposition.

If Ambiga really want to fight for rakyat's rights, she would never throw her tantrum to those business owners. Instead, she would face them, apologize and promise that she would do her best to help them as best  as she could.

But, it was clear that Ambiga would never really do all that. Proof? She did not take any responsibility when her rioters were arrested or injured. She simply did not care about any of them.

So there you go, it is proven that Ambiga us truly a hypocrite and a traitor to the nation. Whatever it is, we would like to thank those business owners who managed to reveal the true face of Ambiga.

Chinese Saying
If you see a snake and Ambiga ,
you kill Ambiga first.
She is more dangerous than the snake.

Cannot give face to this Keling Kiak.

As for N. Ajis , PAS is not an Islamic Party and has never been. PAS is Party Ajaran Setan.

why should i being sensitive to islam in this country?? PAS is behind me....ambabiga said....

She is so stupid just the same as her face shows a dumb looking lady.

1. I’ve seen the genuine expression by the president of Ikhlas in the video, I’ve also seen him complaining after Bershit 3.0 rally over TV3 news bulletin at 8 pm. He spoke with firm intonation, he focused on the consequences that affect business owners. The president is more empathy than this idiot bullying rally organizer.
2. If Ambabiga thinks she has the right to her privacy, she must also think of the rights of traders to set up their business there. But she is not an emphatic brain skull bull-headed woman. She is the most deceitful, unscrupulous crook in Malaysia. She only wants to struggle for the rights of lesbians that are part of homosexuals including LGBT.

which one is she? dumb, dumber or plain STUPID