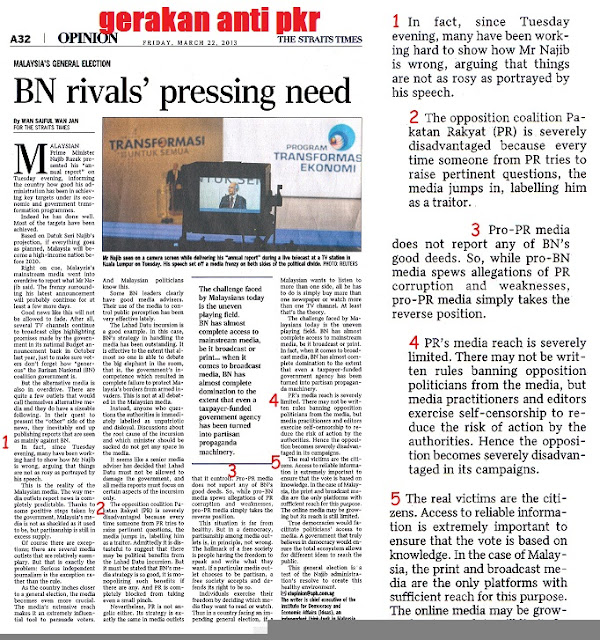 This article is written by Wan Saiful Wan Jan, chief executive of the IDEAS (Institute for Democracy and Economic Affairs), an independent think-thank in Malaysia. 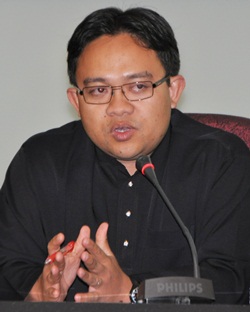 Wan Saiful Wan Jan, resembles a lost dreamer analyst who indulges himself in two-folded capacity of mind; both from a born loser to a represented denial for the sake of opposing.


Just as I read from the beginning paragraphs to tthe hird one, credits were plainly presented to the effective government of BN under the leadership of PM Mr Najib Razak. Wan Saiful inevitably cannot deny the achievable targets under Malaysian Economic and Government Transformation Programmes.


In the rest of paragraphs, one needs guts to shatter his writing to pieces as his negative opinions need a lot of attention.


·       Either his evaluation for PM Najib is dishonest or lack of comprehensive assessment for a good leader, or simply to say he intends to spare the excellent merits to Opposition PKR leader, there are all in self-rightful capacity as an independent thinker.

2.       When the Oppositions had not contributed their constructive and supportive ideas about the case of Lahad Datu, rather than blaming and accusing BN for the incursion; denying the rights of Malaysian Military and Police to execute their responsibility to the nation, how come Wan Saiful Wan Jan rebutts BN’s accurate strong words in retaliation? Is he trying to hide the flaws of PKR leader’s secret plot to turn Sabah into chaos? Deliberately, he gets a chance to slam BN in foreign newspaper like the most welcoming Singapore Straits Times.


3.     Next he acknowledges himself that PR is not angelic either. Hence,


achievements, something is not right here. There are indeed cases of


corruption and cronyisms in the Opposition sides, but why Wan Saiful


discard the true facts? As an honest analyst, he should freely anticipate


backfires from both political sides is only justification. He must expose


these immoral values and illegal activities by Oppositions openly to be


And yet there are also true information written from foreign countries like Australia, Philippines, US and Thailand who even contributed their articles giving the genuine mirrors shining the successes and progresses by BN government in economic transformation programmes!


These rivals, coalition politicians leaders have more than enough needs to be catered for, the final analysis is they should not waste their times and effort thinking for unreasonable wishes. It is high time that Wan Saiful Wan Jan tired himself giving privileges for Opposition coalitions.

I believe a fresh graduate can do better analysis than this guy from IDEAS. I am sorry to say that because you cannot claim to be neutral when you make analysis like that.You succumb yourself to be a GUTTER ANALYST. By the way I am apolitical, a voter from east malaysian state of sarawak

to me wan saiful is not more than a bias & liar analysist.If he is really a neutral commentor or ananlysist,he should comment on both party,either goverment or opposition.he should say something good to what goverment have been done to improved the quality life of Malaysian people.To me as a non partian,i did not see anything good that the opposition have contributed to support what goverment have done.or at least give some good ideas if they think the goverment transform programme did not contribute anything good to the nation.So please wan saiful,if you really a neutral ananlysist say the true thing about your country.if not just pull stop and fuck off.

Wan Saiful Wan Jan worships PKR leader Anwar Ibrahim.
He believed that Anwar has been conforming permanently trying to discard the practice of living in strong community, like the political organization of Umno, that is contrary to his believe in liberitarianism.