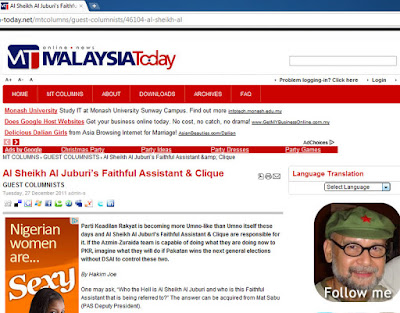 One may ask, “Who the Hell is Al Sheikh Al Juburi and who is this Faithful Assistant that is being referred to?” The answer can be acquired from Mat Sabu (PAS Deputy President).

Back in the dark ages (1977) when DSAI was still the Finance Minister and DPM of Malaysia and prior to Sodomy I, Mat Sabu made this reference against DSAI as a tit-for-tat after Ummi Hafilda lodged a complaint to A/L Kutty that his deputy is bonking his driver, one Azizan Abu Bakar from the rear and one Shamsidar Taharin (Azmin Ali’s missus) from the front. This was pure revenge for DSAI’s chief conspiratory role in having Mat Sabu caught for “close proximity” at Hotel Perdana in Kota Bharu on January the 31st, 1995, two years after the Kelantan State Legislative Assembly approved the motion on Hudud and Qisas.

If pakatan wins the next election the only changes that will happen is that LKS going to be the next head honcho for PR. Full stop.

PAKATAN WILL NOT WIN FOR SURE. 2008 WAS THE BEST CHANCE FOR PAKATAN BUT STILL COULD NOT AFFORD TO FORM THE GOVERNMENT.

I LOOK FORWARD TO SEEING BN GETTING BACK THEIR 2/3 MAJORITY.

Yes my dear, i agree with you.

Yes, agreed 732,
Indeed. 2008 is the best opportunity for the opposition to take over the weaken BN as a chain reaction by the weakest UMNO ever led by Pak Lah, the sammy vellu factor from MIC and the never ending chaos in MCA.

The then 'level 4' factor ruled by KJ, the drama staged by RPK over the deputy PM, plus the sharp increase on the cost of living are the best recipe for the opposition.

Yet, still BN rules. And with all the factors above are no longer exist, with the continuos move by BN to ease the burden of the low income, I could see 2/3 is realistic.

Then Najib do great job giving kebajikan to rakyat..