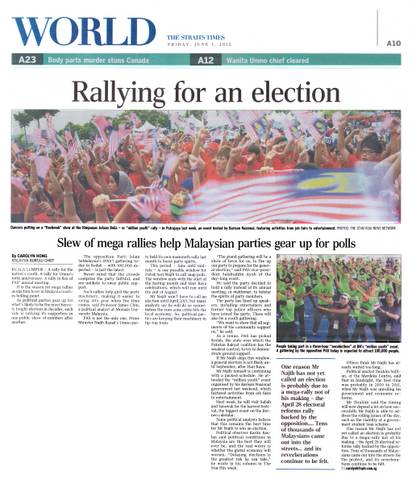 Singapore ST speculates on the timing for GE 13.

Carolyn Hong attributes the delay of GE 13 to Bershit 3.0.

1. BN supporters for the gathering shows “million youth”
as compared to PAS, so pathetic numbers!

3. There is no difference in opinion from Merdeka
Centre’s Ibrahim Suffian, if it is utterly inaccurate
it sounds doubtfully absurd.

4. C.H. speculates about the incoming GE 13 and links it
with the euro zone crisis.
.

thru observations, we can conclude that :

you tried everything and you failed miserably

not only that..every evil scheme you plotted - backfired!

what next? drop a bomb on Malaysia? plan earthquakes and tsunamis on our cities?

YOU know YOU can only FAIL!

So judging from the first article in this STS, it clearly shows that the journalist who reported from Malaysia B C is bias, she only favours PR.
1. She quite often takes opinions from Prof James Chin, who most of his views are not in favour of BN. C.H believes that the euro zone economy crisis will spread cancerous tumors in Malaysian GE 13.
2. She even boosts PAS vice president Salahuddin Ayub whom she does not know so much about the character of this PAS incompetent politician. Lackadaisical attitude politician but conceive too fantasy ambition for sitting on the comfortable chair of becoming the next Johor Chief Minister. She speculates Mr Najib’s decision on the upcoming GE 13 based on her general knowledge, just like any fortune teller who sees the weather forecast of the day. But then her attention is caught when Karim Raslan, the political analyst warns the risk of delaying elections. Another roaring hoax analyst.
3. And she harps on the issue of the government being tormented by the Bershit 3.0 tragedy. Such a humbug statement, any readers can flash that idea, there’s no unique in viewpoints in her report.
4. Another culprit is Ibrahim Suffian from Merdeka Centre. This chief of M C has no credibility to suggest any timing for GE as his job seems to be only taking data and formulate theories from his survey of information. Any department even in the investigation of a patient’s first admission to mental hospital can conduct such data and survey.

When the other report outshines with the achievements of Malaysia’s Felda Global, she cannot quibble to those political analysts above for that the emergence of fine tune nature cannot be defeated by man-made and artificial theories. She must realize that the clause ‘ gives Najib a boost ‘ cannot be denied inadvertantly.

Kump. Abang2 Keluar UMNO or to be precised , PENCACAI DAPigs

This is not 2008 , Pak Lah time .
Najib's time Malays are smarters .
Aljuburi's and gang cannot con them anymore

I am interested to write about the Malays of Singapore in comparison to the Malaysian Malays now. By the way, we still have our Sultan in Singapore, but, he had been reduced to just a mere citizen, nothing more. It is sad, isn’t it? No doubt Raffles bought over Singapore (at just a pittance mind you) from the then Sultan and now, looking at the predicament of the real Tuan Tanahs of Singapore, one wonders if the same fate is going to befall to our fellow brothers and sisters in Malaysia. Wake up please, MELAYU!

Isn’t it enough that you lost Singapore? Batu Puteh? Even right now, our brothers and sisters in Patani are fighting to get their homeland back. There is a lot of bloodshed there; do you all want the same thing to happen in your own Tanah Air Tercinta? To those Malays who have not woken up yet, do you want other people from faraway lands to take control of your Tanah Tumpah Darah and having places like Tamil Nadu and Beijing as their ‘kiblat’? Where is your Malay dignity?

For us in Singapore, the day Malaysia falls to other people other than the Malays, then it is going to be the saddest day for us. Melayu Nusantara akan menangis hiba. No Tanah Melayu means No Melayu. Hilang lah Melayu untuk selamanya. The Chinese have China, the Indians have India, what about the Malays? Bukankah Tanah Melayu ini untuk orang Melayu?

Looking at the brouhaha in Perak whereby a DAP politician recited a Quranic verse, I was not surprised at all. This political party, which is also an arm of PAP in Malaysia used this tactic not without purpose. In fact this is an intelligent way of getting votes from gullible Malay brethrens. Ladies and Gentlemen of Malaysia, Lee Kuan Yew was no different. He speaks fluent Malay and he can write in Jawi better than the Malays themselves. All his children learnt Jawi. It is just that to get to your ‘enemies’, you must camouflage yourself in order to blind them. As I said earlier, some Malays are gullible, easy to “goreng”, maybe due to their lack of education or too much education, they will follow whatever is being told to them by their unscrupulous politicians (of their choice of course). The stupid Malays follow because they want to please their ‘masters’ whereas the ‘clever’ Malays follow because they want to appear liberal and progressive, others are just ‘Pak Turuts’ because they are actually fence sitters without any clear direction.


You know I could just keep my mouth shut where Malaysia is concerned, not my country anyway....but, when I read some posts and comments in Malaysian blogsphere that were written by some ignorant bigots and Malay Apologist condemning Melayus, I told myself that I should open my mouth and tell you all of my experience in my own Tanah Air.

I'm definitely sure that DAP gets their tuition from big brother PAP. LKY used Malays to "conquer" the Malays, he used also his own proficiency in the Malay language to 'ambil hati' orang Melayu. Fighting for Malaysian Malaysia at first, but the moment he took over Singapore, there was no such thing as Singaporean Singapore....it was more like Chinese Singapore....Huh, I won't elaborate on things that were "done" to us here ....The result is we feel like we are the 'penumpangs' ..not them....they took over everything ...they talk about meritocracy ...that is BS ...Meritocracy is just a blanket for Chinese hegemony (now, even the Indians have a little bit more of the pie but I can't say the same thing for the Malays).

I've actually read a DAP manifesto online on how to "conquer" Tanah Melayu by 'conquering' the Malays. But, unfortunately I forgot to jot down the url address. Yes, they can get the power if you Melayus in Malaysia let them do it ...DAP is using PKR Melayus/PAS as proxies for their own agenda. After that, it is going to be 'habis manis sepah dibuang'- just like what PAP was/is doing to the Malay MPs/Ministers in Singapore.

simply stopping by to say hi