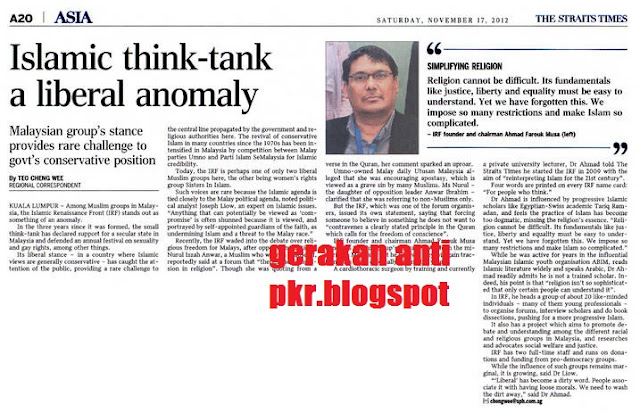 Dr Ahmad Farouk Musa never mentioned that Ummah in the universe must be based on teaching from Al-Quran and authentic Sunnah. Is he attempting to lead assumptions that the teaching of Islam can be made simple by reforming all from halal to haram, like legalizing homosexuals? Beware of his liberal ideologies that could lead to ‘syirik’.

This so called ‘expert on Islamic issues’ said that the founder of IRF, Ahmad Farouk Musa believes that his liberalist think-tank organization would swell up gradually among the young beginning from 20 membership.

Teo C W has weak discernment to conclude that the 20 like-minded professionals are all brainwashed by the IRF founder.

IRF runs on donations and funding from pro-democracy groups.
We all must be extra careful when considering helping these IRF, whose aim mainly is to strive for Islamic liberalism in the 21stcentury.
Do not donate to Islamic Renaissance Front charity.
See http://www.irfront.org/
٭ Note these points about Dr A F Musa :

He is also a columnist for Harakahdaily and Malaysiakini. Hence, definitely he is an Opposition lover.

Islam ARE Al-Qur'an and the authentic sunnahs of Prophet Muhammad (may Alllahs peace and blessings be upon him).

Homosexuals must be exectuted and Anwar screwed Saiful in his rectum.

This is the same bloke who sat with Nurul at that Church Forum!! Nurul was videoed quoting and agreeing with him on the no compulsion interpretation of Surah Al Baqarah!!

Dr Ahmad Farouk Musa said, “Religion cannot be difficult. Its fundamentals like justice, liberty and equality must be easy to understand. Yet we have forgotten this. We impose so many restrictions and make Islam so complicated. “

1. It is not true that JAKIM has forgotten fundamentals like justice, liberty and equality. However, this founder of Islamic Renaissance Front merely wants to gain popularity by reinterpreting fundamentals like Tariq Ramadan is doing now in the West. Dr Ahmad Farouk Musa does not have to meddle with the fundamentals of Islam for the 3 categories, because Islam in South East Asia is well taken care of by Muslim Malay and Indonesian ulama’s.

2. Tariq Ramadan believes that the Muslim leadership in Europe is partially responsible for the sometimes shaky relations between Muslims and the rest of society. He believes that they have been overly defensive, and have not properly explained the philosophy of Islam, nor have they engaged sufficiently with non-Muslim society.

3. That happens in Europe, but not in the South East Asia, as long as Malaysia is concerned , Dr Ahmad Farouk Musa should leave the dilemma of Islam in Europe, to Tariq Ramadan to overcome his problem, and it does not mean anything to Malaysian Muslims. The problems of Islam in Europe are different.

4. Dr Ahmad Farouk Musa is wasting his time and effort in quest for charity from the public. The donations in fact could be channelled to helping the poor as well as the orphanage home or for home for the destitute. If he is genius, he should prove his credibility by doing scientific research for the betterment in Malaysia’s health care and environment. He is a cardiothoracic surgeon, he should widen his scope of professions rather than spending his time in explaining about Islam.
5. Is there anyone find that Islam is difficult?
Just solat 5 times a day and perform the 5 pillars of Islam as a fervent Ummah.

6. If this man reforms too extensively for the 21st century, merely to simplify and easily be practised, regardless of the breaching the boundary between ‘haram’ and ‘halal’, he could teach the young into leading the creation of unconscious ‘bida’ah. Generation Y and Z will get confused and finally they would be led to ‘apostasy’.

7. Many ulama’, including muftis and imams, Islamic lecturers have contributed excessively adequate discussions and explanation in various means, the easiest way is through television programmes, be it on TV 3 or TV 1, even TV 9, there is no way that people find it difficult.

freemalaysiakini2 , Delivers The Latest Breaking News And Information For Free....

2. Why must Salim Osman appreciate her remarks when she was directing to all people including Malays?
3. Why cannot he condemn her remarks as a Malay-Muslim?

4. A munafik Muslim deliberately accept ideas from another munafik’s to put himself into the same categories and to show solidarity, is clearly shown.