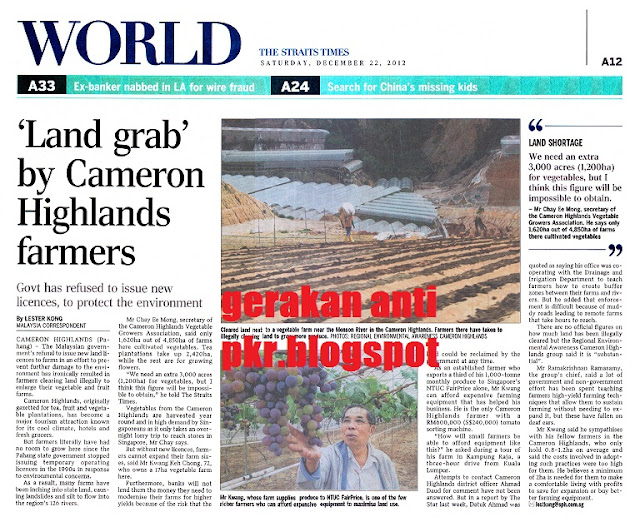 
Malaysian government was blamed for refusing to grant issue of new land licences to farmers, reported by Lester Kong.


Vegetables from Cameron Highlands are harvested a year round to meet the demand by Singaporeans. Mr Chay Ee Meng, the secretary of Cameron Highlands Vegetable Growers Association, added the transport to reach stores in Singapore takes an overnight trip by lorries. NTUC FairPrice is the main importers from Singapore, which totalled one-third of its 1,000 tons of tomatoes monthly.

According to L.K., the Star reported that district officer, Datuk Ahmad Daud, expressed difficulty guiding farmers how to create buffer zones between their farms and rivers with the co-operation of Drainage and Irrigation Department. Regional Environment Awareness of Cameron Highlands group also claimed that illegal land clearing was considerable.


Stern actions must be reinforced by relevant authorities to prevent from further stealing of new lands.

Lester Kong must think otherwise; farmers aspiring for big scale business to meet their conflict of interest could affect the supply from all farmers in Cameron Highlands.

Malaysian government should ignore these vegetables and fruit farmers’ complaints as those who aim for huge profits will never get satisfied with their wealth.
H.S.

1. Singaporean importers should not push the farmers in Cameron Highlands to grow more fruits and vegetables if the farmers cannot expand bigger land. Singapore importers are the cause of farmers stealing state lands just for multiplying their wealth, and this is not a healthy competition.
2. Cameron Highland farmers in fact were taught how to achieve high-yield farming techniques, that allow them to sustain farming without needing to expand their land, but the farmers themselves are stubborn, they refused to put in their effort. Instead, the farmers grabbed the state land, isn’t feasting on illegal business?
3. Mr Kwang, who can afford expensive farming equipment with RM 600,000 (S$240,000) tomato sorting machines could share his experience with other farmers and guide them in order to lead these farming business in legal way.

Why must heed to the requests by these greedy farmers at Cameron Highland. Efforts by the state govt as well as NGOs in teaching these farmers the modern, efective and productive ways of farming was not heeded. These farmers should have invested in doing modern farming to increase their harvest, instead they are reluctant to make such investment. What they are interested is to get more free or cheap lands. It is not hard or diffucult to make a guess coz these farmers (primarily Chinese) are greedy and wants to make quick money on the pretext to temporarily owning the lands and subsequently lease or sell them to Chinese entrepreneurs from S'pore. For that reason, I would advice the Menteri Besar to ignore these greedy farmers requests and stick to the original plan by asking these farmers to educate themselves to improve the yield based on their existing land size. There are bound to be strong potential of pollution in enormous scale to the green nature shud more lands are being given to these greedy farmers coz they will practise the same methods which will damage the green nature and later will demand for more lands. As far as S' pore Straits Times, this neighbour news wire has ulterior motive.

Farmers must differentiate between big scale farming and family farming.

Big scale and a few farmers but they need farm-workers and machines.

Family farming for living and moderate living - small machines and a few workers.

This is a national economic issue and the government have to set up a long term plan.

Cameron Highland surely have capacity for both kind of farming. I refer to BOH tea-farming and some strawberry farmers.

The government can recommend kind of farming in order to supply all demands. It's a good task for the agricultural minister.

duh..so singapore demand provides the basis of illegal use of reserve land?

Why blame Singapore for all the land issues.? If the authorities were to do their job and flea out the mole in the land office, the issue can be curtailed. I think money is the issue. Why not hang those who are caught giving out information on the raids? Do like what China is doing on corruptions.Forget about the NGOs who are complaining about human rights, tell them to put their head between their legs and kiss their ass goodbye.