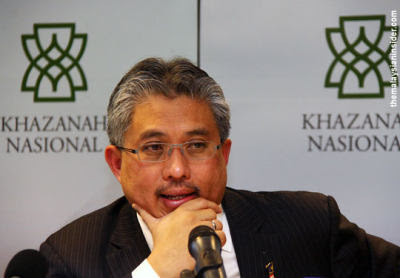 August 9, 2011 by weechookeong
I would like to share this comments which I have received from a reader, Warrior 123. I am surprised that mainstream newspapers like Star and others, have resorted to quoting sources, has painted a very rosy picture of this AirAsia/MAS share swap without any analysis on the income statements of AirAsia. Please read this well thought out piece below. Judge for yourself.  I hope that Tan Datuk Sri Azman Mokhtar, head of Khazanah Nasional Bhd, and the bankers can convince us otherwise with their own analysis based on the AirAsia financial statements.
1.As of the 1st Quarter of 2011, Air Asia (AA) debts amounted to 7.7 billion with cash balances amounting to 1.7billion.
2. In August 2010. AA announced a deferment of their proposed aircraft purchases but sometime in June 2011 they reversed their decision and proceeded to place an order for an additional 200 new aircrafts at the Paris Air Show.
3. As of 31 March 2011, based on data from their 1st Quarter report, AA’s capital commitments stood at RM 19 billion. With the above announcement, an additional RM 54 billion will be added as Capital Commitments as implied in this article:
http://biz.thestar.com.my/news/story.asp?file=/2011/6/24/business/8966621&sec=business
the proposed CC of roughly 75 billion will be spread over a 15 year period ending 2026. In other words,AA has to ratchet up its earnings to an average of 5 billion per annum to meet its future dues. From 2006 to 2010. AA’s revenue grew by 10 fold from 110 million to roughly 1.1billion, an average growth of RM 200 million per annum.
4. Its cash trove rose 6 fold from approximately 300 million to 1.7 billion but its debts skyrocketed from 1.05 billion in 2006 to 7.7 billion in 2010, an increase of 700%. One gets the ghastly feeling that this is a debt burden that is spiralling out of control.
The schedule for the aircraft delivery is as follows with the Neo being received from 2016 onwards:
2012 = 14
2013 = 13
2014 = 18
2015 = 19
2016 = 19 (4 Neo)
2017 = 14
2018 = 18
2019 = 19
2020 = 20
2021 = 21
2022 = 23
2023 = 24
2024 = 24
2025 = 24
2026 = 9
To compound the issue, the world economy including Asia’s will be into another maelstrom and air travel will invariably be hit:
http://www.sfgate.com/cgi-bin/article.cgi?f=/g/a/2011/08/02/bloomberg1376-LPCGED6TTDS201-7DB69T4DDVIF7J1IS4SUCOAULO.DTL
and we probably will have a white elephant in NS soon give or take three years and another one of my dire predictions I made in when commenting on AA in 2009 materialises.
Of course AA can cancel orders but contract penalties will be onerous. In any case, TF is betting on the assumption that being a big borrower will shield him from foreclosure as banks will be leery of bearing heavy losses! bUt then a sizeable chunk of those loans are being held by Malaysian banks and in the worst case scenario, the government and the taxpayer will have to pick the tab to avert a financial meltdown cascading down the AA slope.
Warrior 231 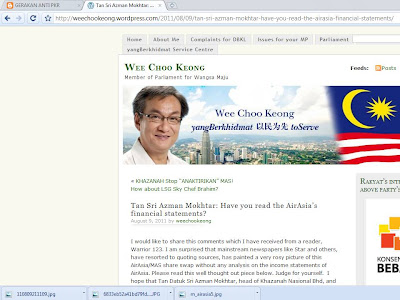 By Agence France-Presse, Updated: 8/10/2011
Malaysian airline tie-up hailed as a win-win
The surprise alliance between loss-making flag carrier Malaysia Airlines and no-frills AirAsia will turn a costly rivalry into a partnership likely to boost their revenues, analysts said Wednesday.

0You recommend thisYou don't recommend thisShared 7 times
Industry experts hailed the strategic tie-up as clearing the way for each side to focus on and grow their core markets -- Malaysia Airlines as a premium long-haul carrier and AirAsia as an aggressively low-cost budget option.

The refocusing of the two Malaysian rivals is expected to better enable them to meet tough competition from the likes of regional giants such as Singapore Airlines and Thai Airways.

"Their partnership will result in the consolidation of the domestic aviation industry," Shukor Yusof, an aviation analyst with Standard & Poor's Equities Research, told AFP.

"More importantly for ailing Malaysia Airlines... it will help boost their revenue, with AirAsia providing the expertise," he added.

At the heart of the deal is AirAsia's colourful CEO Tony Fernandes.

The former music industry executive quickly steered the once loss-making budget carrier into the black after acquiring it a decade ago, and the government clearly hopes he can do the same for Malaysia Airlines.

The tie-up announced Tuesday involves a share swap and a new management team for state-linked MAS that brings Fernandes into the boardroom of his erstwhile foe.

"The concrete efforts to revive MAS, and a revitalised board member and management team will provide fresh impetus to MAS's turnaround," securities firm AmResearch said in a research note on the deal.

Meanwhile, state-controlled Malaysia Airlines, launched 64 years ago, has more than 110 airports on its route map.

Currently, they compete head-to-head on a number of key routes, hitting their bottom lines.

But the deal is seen leading to a mutually profitable route rationalisation and other cost savings such as shared aircraft maintenance and joint purchases of planes.

"This is especially related to the optimisation of routes and in the sense of avoiding cannibalisation" -- in which carriers hurt each other by competing for the same routes -- Malaysian firm TA Research said in an analysis of the deal.

It added AirAsia could see quick gains if Fernandes succeeds in reining in competition from MAS's domestic budget carrier Firefly, while MAS will benefit from the infusion of "new blood".

The deal will give AirAsia an extra edge in the region's fast growing budget air-travel sector, which has seen a number of new airlines set up as firms try to make the most of Asia's rising middle class.

As AirAsia has steadily expanded, MAS has struggled. In recent years it has been forced to sell off its headquarters, slash unprofitable routes and fire thousands of staff to avoid bankruptcy.

Hurt by rising fuel costs, in May it posted a first-quarter net loss of 242.3 million ringgit ($79.9 million) compared with a profit a year earlier.

However, Shukor said it remained to be seen whether the pair will gel.

A key point is whether Fernandes is given free enough rein to "weave his magic" for MAS, he said, noting the flag carrier has a 19,000-strong workforce that will be politically difficult to trim.

"All in all, it looks reasonable. But I won't say it is workable because the devil is in the details," he said.

The deal also has raised anti-trust concerns -- it is subject to a monopoly review -- and may not necessarily lead to lower prices for travellers.

"It will be logical for the new alliance to control prices. Airfares probably will not be reduced," Shukor said.