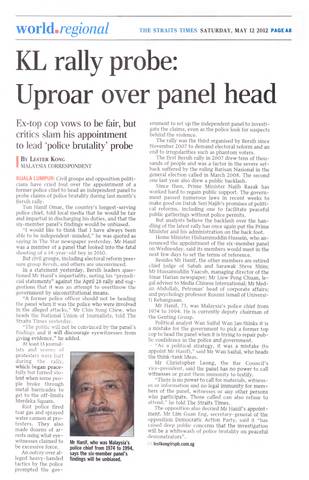 Singapore Straits Times criticises the formation of Independent Panel to Bersih 3.0 rally probe.
1.    Lester Kong reports flocks of dissatisfaction from the civil groups and opposition politicians. The National Union of Journalist’s president, Chin Sung Chew refused arrogantly against Tun Hanif Omar, (former police chief) to be one of the panel’s team members. Chin unconsciously shows a sign of cowardice that rejects any defeat in the journalist professionalism when they, the affected journalists - the substandard journalists - who unfairly blamed the police without total understanding of political dichotomies in Malaysia .

2.    Another block-head that catches the attention by Lester Kong is the pro-opposition think-thank Ideas, Wan Saiful Wan Jan.

3.    Lester Kong adds fury to the supporters for PR in Singapore by printing the remark told by DAP Secretary-general Lim Guan Eng.

We must bear in mind that journalists, political analysts, reporters and media, they are not divinely angels or Messengers of Allah who would transmit accurate news to all of us for future development, and therefore these people cannot change veryone’s perception that leads to every political event. 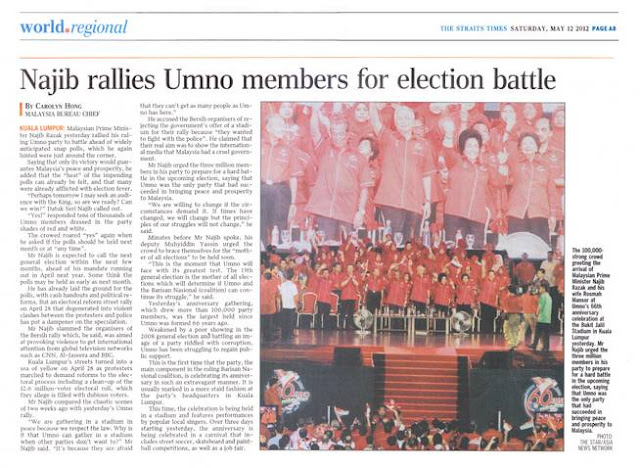 1.    Carolyn Hong uses the term ‘extravaganza manner’ to hint at UMNO’s way of celebrating the 66th anniversary. She is constricted by the pangs of envy when in reality the term should be rephrased as ‘gigantic and tremendous supporters’.

2.    She harasses readers in Singapore repeatedly on ‘the 2008 general election’ that weakened UMNO and she repeats the elements of corruption to convince pop-in readers.

of course carolyn dont like tun hanif bcoz tun hanif is the inspector general who knows about wrongdoing of her boss, ,anwar ibrahim maaa.

anwar likes to play with shit so does carolyn. shit is the most likes by opposition anyway. hehe.

this shows the envy of the people across the causeway towards us Malaysians. They are afraid that the Malays in Singapore will be fired up as they see Malayss ,particularly UMNO memebers celebrating in the way they do.
in Singapore the Malays are as we say " pendatang the negara sondiri".Singapore belongs to the Sultanate of Johor berfore being sold to the British. Thus it must be return to Johor. I don't see any reason why not? We have done many thinbgs that the Singaporean could not. Even recently ,our own commando regiment managed to infilterate Singapore to tell them that we can any time conquer the island.
Lets us all Melayu be united and make sure that before we leave this world Singapoe is back in our hands. Bangun lah wahai bangsa ku dan pertahankan lah apa hak kito.

World percetion? Haha do you know who I am? If you don't know...go to hell will ya!

On the first article
1. The opinions from Wan Saiful Wan Jan and the Bar Council should not be treated sincere, as their views seem to be irrelevant.
2. As for LGE, the DAP secretary-general certainly refused to accept the blame on the part of opposition and therefore his tendency for confession is always controlled his stubborn denial. A liar is always a liar. Never trust a word from this Penipu Rakyat leader who perpetually seeks revenge against the police. That is the principle of a communist.
3. The journalist could pass the requirement for becoming DAP propaganda.

Dont intefere with Malaysian affairs mind your business..and look at your ISA first. it is draconian.

Talk about Singapore is wasting our time. It has been like that since inception. why n how separation came about?? its bcos Lee Kuan Yew's Malaysia Malaysia and being echoed by DAP or Lim Guan Eng i.e against the Malays. Still freesh in our mind immediately after General election in 2008 Lee Kuan Yew visited five opposition won states, giving them moral support and promised Lim Guan Eng he would show Penang DAP govt step by step of what he did to Malays in Singapore after winning election in Singapore in 60th..He campaign in Malay areas wearing songkok and wishing assalamulaikum, after winning the Malays were sufferred. No Malay pilot in SAF, no Malay in any organisation head by the Malay armed forces or Govt Dept unlike Malaysia. Does these few reporters or called journalist read history. They onmly print racist remarks. Now Malays in Spore very quiet, mostly doing odd jobs to earn living, there are some in govt departments but all the way take instructions only and happy with it. The identity that Spore was originally Malay land has been blancoed, go to Spore muzium n see it for your self. deleted.