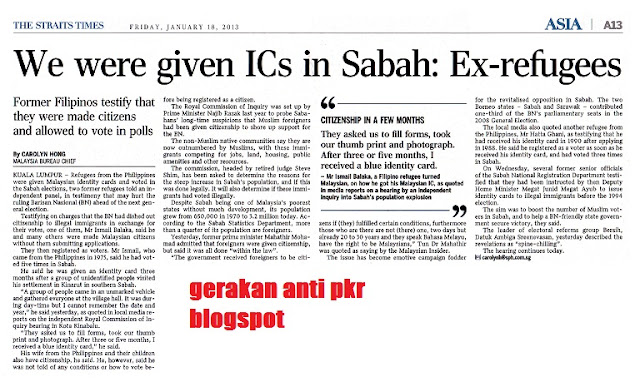 Singapore Straits Times reports from the hearing of Sabah’s Royal Commission of Inquiry in Kota Kinabalu.

Carolyn Hong bluntly revealed BN’s fault for giving ICs to refugees from Philippines and allowed them to vote in Sabah past elections.

“The  government received foreigners to be citizens if (they) fulfilled certain conditions, furthermore those who are there are not (there) are one, two days but already 20 to 30 years and they speak Bahasa Melayu, have the right to be Malaysians, “


She attacked on BN for favouring the number of Muslims voters to boost their victory.

She is a typical type of religious and race chauvinist journalist who works for the agent of Opposition DAP.

Their grudge against Umno had swelled up triggering their driving urge to boost Opposition’s victory.

Writing like a monkey out of Singapore Straits Times, she possesses no general opinions that populations after several decades do naturally grow and expand in any living places on planet Earth. The fact that Carolyn Hong wrote only one side reporting the hearing, she lacked judicial views intending to point fingers at BN.
H.S.
Posted by GAP KEMBALI at 6:36 PM

Can we fuck her ass

WHY CAN'T CAROLINE HONG REPORTED THAT SINGAPORE GOVERNMENT HAS GIVEN MILLION OF SINGAPORE CITIZENSHIP TO CHINESE MAINLAND MIGRANTS AND HONGKONGERS. WHY MUST SHE "KAYPO" ON MALASIAN SOIL.

THAT SHOW SHE IS PRACTISING ESPIONAGE ON MALAYSIA. WHEN MALAYSIAN GOVERNMENT GOING TO COUNTER ESPIONAGE?

i AM SORRY AS MALAYSIAN AMBASSADOR TO SINGAPORE ARE SLEEPING. THEY ARE USELESS DIPLOMAT.

ask this 'little ah moi' to talk and write the thruth about singapork opposition politician. criticised the singapork government policy if she dare enough.

She is a political prostitute. For the right price she can be banged and gang raped too. What can you expect from a pig!

HELO SINGAPOREAN, MIND YOUR BUSINESS AND YOUR OWN COUNTRY (MERELY AN ISLAND STATE) IT IS ANY GOVERNMENT'S RIGHT TO DECIDE WHO SHOULD BE GRANTED CITIZENSHIP. AS SUCH CITIZENS OR GOVERNMENT OF OTHER COUNTRIES HAVE NO RIGHT TO INTERFERE. PLEASE INVESTIGATE YOUR OWN GOVT. POLICY OWN THEIR RIGHT TO GRANT CITIZENSHIP? HAD MALAYSIA OR ANY OTHER COUNTRY IN THE WORLD QUESTIONED YOUR GOVT. DECISION? SO JANGAN NAKK MENYEBOKLAH SINGAPOREAN CITIZENS, PARTICULARLY THE "STRATIS TIMES" SINGAPORE.

MALAYSIAN SHOULD NOT BE SHOCKED OR SURPRISED ON THE ATTITUDE OF OUR NEIGHBOUR, PARTICULARLY SINGAPORE. INDONESIA HAD EVEN CONQUERED CERTAIN ISLAND TO BE BECOME PART OF THE REPUBLIC (AND OF CAUSE THE ISLANDER BECAME INDONESIAN CITIZEN "AUTOMATICALLY" BY VIRTUE OF SUCH "COLANIZATION". WHATS WRONG WITH THAT ACT.THE THAN MALAYAN GOVT. GRANTED CITIZENSHIP TO MIGRANT RACES WHO WERE BROUGHT IN BY THE COLONY MASTERS. WHATS WRONG WITH THE THAN GOVT. ACT? SO ORANG SINAPURA (PARTICULARLY THE NST JANGAN NAK JAGA TEPI KAIN ORANGLAH)

Aku dah lama BOIKOT Singapork ni.....So kita yg sokong BN should do the samething...BOIKOT ANYTHING TO DO WITH THIS REPUBLIC OF PIGS EATERS...

Let the process of the investigation under the RCI flows steadily, things are getting better and better let us listen to every quarters what they have to say fair and square. Finally the answer will emerge. What ever the outcome would be I still say no to Pakatan because by far I don't see any stout long term constructive resolution in dealing with local or international affairs. The loser Anwar Ibrahim only talks, he doesn't implement, until now the stability that we have in this region is the most valuable thing that we share. Every Malaysian, Indonesian, Filipino, Singaporean, and our other neighbouring countries know this. In honour to all the people who treasure harmony and solidarity in this region I will vote BN in this coming 13th Election.

Wey Kanebo Bucibai Singaporean! You're not Sabahan so please shut off your big cipet!!!